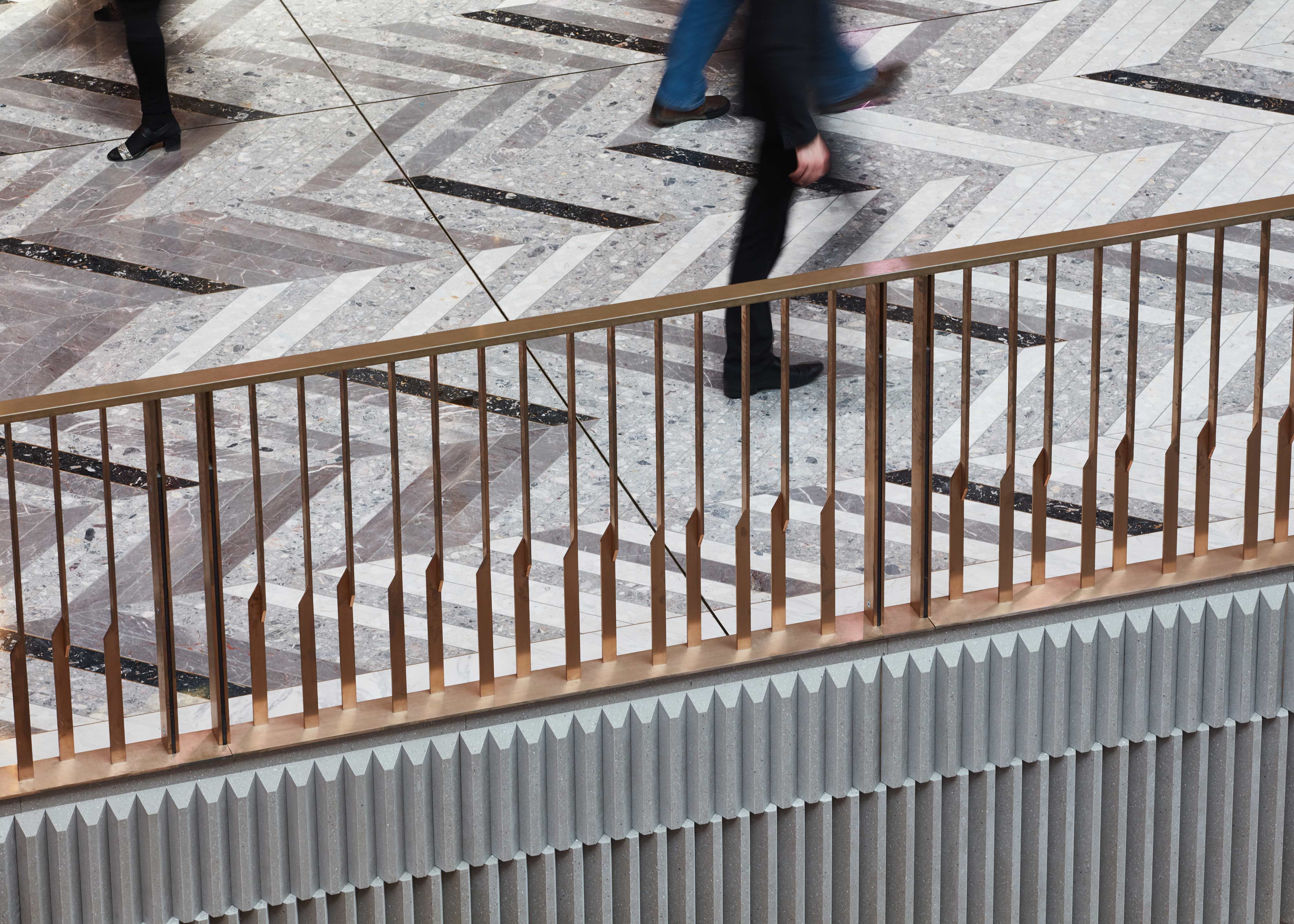 Richard Ryan, associate director at UDS, is sat in the London ofﬁce on an uncommonly sweltering August day describing a city on the other side of the world. “Canberra was originally planned from the ground up by Walter Burley Grifﬁn, an American architect who trained in the Prairie School style made famous by Frank Lloyd Wright,” Ryan explains. “Grifﬁn and his wife Mahony won the competition in 1912 to design the layout of a capital city midway between Melbourne and Sydney, Australia’s two largest cities.”

“Architects thereafter have built within his principles, inspired by the City Beautiful and Garden City Movements, and have always stayed true to the era, which was obviously mid-century but also deeply Brutalist, as seen in many of the ofﬁcial buildings,”
he says, clicking through 1960s black and white images of the city’s retail district. “All of that ties in with the rich heritage that we have to work with.”

Ryan is discussing Monaro Mall, a landmark development built in Canberra in 1963, which UDS has spent the past four years redesigning and refurbishing. The mall formed part of Grifﬁn’s original grand design but showcased the latest technological advancements of the time, such as air-conditioning, and was the ﬁrst shopping centre in Australia to do so. Early pictures of the mall show tall arched canopies, lush vegetation, mosaics and air bricks. “Canberra was always seen as the Palm Springs of Australia and you deﬁnitely see that in some of the style,” says Suzanne Gaballa, senior associate at UDS.

This is the second project that UDS has worked on with QICGRE. The ﬁrst was the redevelopment of Eastland outside Melbourne, and planning is currently underway for Castle Towers in northwest Sydney. The latter is a transformation that will increase the centre’s size by 80,000 square metres, the studio’s biggest project to date. How does UDS think it’s helping to evolve the design vocabulary of malls and shopping centres? “We hope there’s an originality in not going for the polished, classic mall look. It has to be multifaceted,” says Gaballa. “We are trying to question that and change the fundamental design elements.”

UDS was established in 2001 as the architectural arm of the design business run by British product designers Edward Barber and Jay Osgerby. Under their brand name Barber & Osgerby, the pair has created iconic pieces for global brands such as Italian furniture maker B&B Italia, Swiss design institution Vitra and iconic lighting brand Flos. They were also the creative minds behind the Olympic torch for London’s 2012 games and the design of a £2 coin to celebrate 150 years of the London Underground.

UDS was set up to expand Barber and Osgerby’s practice into the built environment and is co-directed by Hannah Carter Owers and Jason Holley. Projects have included the Frieze Art Fair for four years running, the Ace Hotel London, At Six Hotel in Stockholm and
stores for Mulberry and Stella McCartney. As a group, the collective (including Barber and Osgerby), covers product design, interiors and architecture.“We design everything, down to door handles and surfaces,” explains Gaballa.

It is this all-encompassing working process that binds the UDS portfolio together. “We have an approach that is unique,” says Ryan. Gaballa agrees, “Research is key for all of our projects, it’s the basis from which we move forward. Narrative is fundamental in developing concepts speciﬁc to each client and locality. We value real materials, scale, volume, textures and of course, light. How all these qualities come together, and what they bring to the senses, is what we believe uniﬁes all our projects.”

The two discuss the Ace Hotel in east London, which was completed in 2013. The studio took inspiration from bicycle-enthusiasts, designing brass door handles in the likeness of bike handles wrapped in grip tape. Meanwhile, the hotel canopy twinkles with spotlights, a nod to the theatre that the site housed many years ago. “We dug all of these things out of the historical ﬁles,” says Ryan. “There’s a richness of intelligence in what we do.”

This notion is especially apparent in the Canberra project. Firstly, the studio examined Walter Burley Grifﬁn’s original plan for the city, which featured Ainslie Avenue as one of the main arteries leading up to Mount Ainslie. The mall covered up this axis, and one of the conditions was to keep it open for future rail infrastructure and public access. “It’s lovely that the city has followed through from that,” says Gaballa.

The studio also studied the Garden City Movement — a mid-century idea promoting the use of trees and greenery in the urban landscape, designed to entice people out of their cars and onto their feet. This inspired the redevelopment of the corner entrance of Monaro Mall on Bunda Street, which has become a double-height, inside-out glazed space with planting and places to pause. Pavements have been widened to encourage foot trafﬁc, while canopies have been reinstated and deepened for the same reason. The canopies, decorated with a brushed bronze ﬁnish, symbolically ‘crown’ the space.

Many of the architectural details found in Canberra — gems such as the National Gallery of Australia also proved inspirational. Brutalism was interested in purity of form and the power of geometry — elements that informed UDS’s development of the triangular motif found throughout the Monaro and Ainslie Mall sites.

"I have planned a city that is not&nbsp;like any other in&nbsp;the world. I have planned it not in a way that I expected any government authorities in the world would accept. I have planned an ideal city — a city that meets my ideal of the city of the future." Walter Burley Griffin, 1912
The floor is covered in a triangular pattern constructed from terrazzo and marble. At Ainslie Mall, the central 'avenue' is made up of a stream of herringbone chevrons, while triangular lights illuminate Monaro Mall's Beauty Garden. "There's so much triangulation in form, it's part of the language," says Ryan. Broader mid-century ideals — such as staying true to materials — are also apparent in the design, which is a rich mixture of marble, concrete, terrazzo, jesmonite and bronze. As a London-based studio, the Australian location also proved inspirational for UDS, with the angle of the sun and strength of light unlike that in Europe. On Monaro Mall's upper ﬂoor, cone-shape skylights have been added to create what Ryan calls a"James Turrell moment". "It will create drama with the Australian sunlight coming through," he says. UDS fully embraced working with the existing structure's heritage and the modernist plan of the city. So what would Walter Burley Grifﬁn have made of its overall impression of mid-century values, and its contribution to the urban landscape of Canberra? "He would have approved," says Ryan. "We're not looking backwards. It's a balance between old and new."
Tags
Architecture
Retail
Share
Read moreRead more
View all