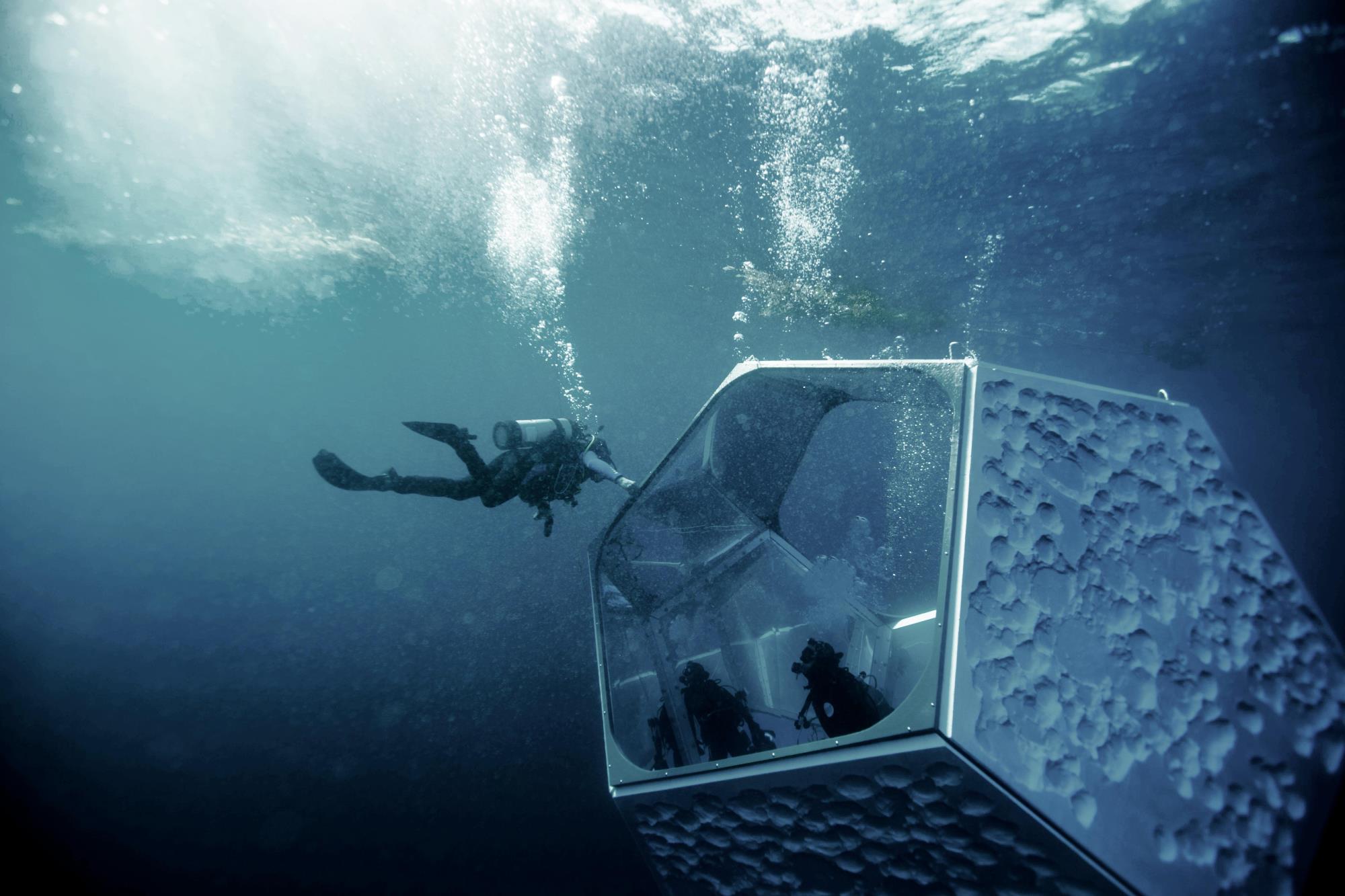 Profile: Cyrill Gutsch on saving the oceans
Sustainability
“Plastic is a superstar,”says environmentalist and businessman Cyrill Gutsch –the individual behind arguably one of the biggest movements currently trying to eliminate the controversial material. “Where bronze and iron used to stand, plastic is now the ultimate celebrity material, the Warhol of its age –but for all the wrong reasons.”
Share
“It’s a drug,” according to Gutsch, and seemingly one of the most addictive ones on the planet. He’s not wrong. Among a growing web of environmentalists, ocean charities and campaigners, he is taking a different approach to the war on plastics, and that’s by making a business out of it. Gutsch is the founder of Parley for the Oceans, an organisation that’s signing up big brands like Adidas to stop using virgin plastic altogether. Parley is an organisation that aims to solve the plastics crisis through a variety of collaborations between creatives and corporations. “We are not in the business to make money with solutions,” Gutsch says. “We are in the business of saving the oceans. Our client is the sea.”

Gutsch wasn’t always so hopeful. Born in Frankfurt, he grew up in Freiburg, Germany, a small town in the Black Forest where the community was “completely hooked on going green”. He had long been aware of the plight of the sea, but wasn’t positive about the future. “I felt this planet was suffering because of our doing, and that there was no way we could ever turn it around. I didn’t see people who cared.” His initial career in design started around the same time as his eco-consciousness. At fourteen, he launched his first company (a snowboard brand in his grandmother’s basement), formulating ideas, making them happen and generally “being independent”.

He often wondered if the only legacy of his generation would be “pretty much leaving a dead ocean behind”. That was until he met Captain Paul Watson, a Canadian marine environmentalist and conservationist. The meeting took place in 2012, around the time the captain was arrested for allegedly sabotaging a Japanese whaling fleet and given an extradition order from Costa Rica for violating navigational regulations. Watson was notorious for his expulsion from Greenpeace in the seventies, after which he started his own marine charity, the Sea Shepherd Conservation Society (its logo is a skull and crossbones with two fish tattooed on its forehead). Amid various plights to prevent the slaughter of sea animals, Watson had been dubbed an eco-terrorist by the Japanese government – at the same time as being named one of Time magazine’s top twenty environmental heroes of the twentieth century. It took just one meeting for Captain Watson to convince Gutsch that “lost causes are the only ones worth fighting for”. Gutsch used this meeting as the catalyst to flip his product designer career on its head and focus on his new client – the ocean. And thus Parley was born.
"To say 'stop doing this and that' is a hard message if you don't know what the alternative could be. Parley is more about inviting people to use their creativity and collaborate and be part of eco-innovation."

It wasn’t just Captain Watson’s impressive résumé that convinced Gutsch of the need for action, but the figures he laid before him. In 2012, 288 million tons of plastic were produced in the world. That’s more than one billion tons every four years, eight million of which end up in the sea annually. That’s enough to cover the world’s entire coastline. And there’s more. In 1999 it was estimated there was six times as much plastic in our oceans as there was plankton. In 2009 this figure increased to thirty-six times more, with scientists estimating 100 times more by 2019. Fish involuntarily digest plastic and we voluntarily digest fish, meaning almost every piece of plastic we throw away is finding its way back into our bodies.

In light of all this, Gutsch changed the direction of his creative work, focusing on design with a conscience. He started Parley in 2012 with the aim of reducing plastic use and saving the ocean by “creating a collaborative network that agrees on strategies and works towards the same direction, but implements and develops solutions in individual ways”. Parley literally means to hold a conference with the opposing side to discuss terms, or to Pirates of the Caribbean fans, it’s a way to get you off a sinking pirate ship – apt, considering the task ahead.

"Environmentalism as we know it has failed," says Gutsch of the current organisations he feels have disempowered people. "To say 'stop doing this and that' is a hard message if you don't know what the alternative could be. Parley is more about inviting people to use their creativity and collaborate and be part of eco-innovation." Instead of asking people to donate money and let the experts do the rest, Gutsch wants to prove that it can be more rewarding – and lucrative – to protect the oceans than destroy them. At the forefront of Parley's eco-innovation is their pioneering alternative to new plastic: this is where ocean plastic comes in.

The idea was to turn marine debris into a premium plastic that could be used instead of relying on the excessive production of the virgin kind. Ocean plastic is a cocktail of materials: HDPE (which comes from softer plastics such as shampoo bottles), PT (which comes from harder plastics including water bottles), Nylon 6 (which comes from fish nets), and Polypropylene, as well as an array of other plastics. This mixture is collected from ocean beds as well as beaches, eventually getting woven into a yarn that can be used for whatever the client needs.

The process of making the mixture into a new fibre wasn't easy. "We had to establish a global supply chain," says Gutsch. "A network of manufacturers and recycling plants, of experts and non-profit organisations and individuals and governments to turn this marine debris into an upcycled premium material." It was, he says, "the ultimate collaboration". Are there real benefits to using this plastic, aside from the obvious bonus recycling points? "Our chemist has worked a lot on that question," says Gutsch. "He said, 'there must be a positive effect, there must be something special happening with this plastic'. He calls this Ocean Temperate. Unfortunately, I cannot reveal the results." Why? "We have a secrecy agreement." But rest assured, Gutsch says, it's definitely better than making new plastic, he just can't tell us how, yet.

It's safe to say that since Parley's inception, ocean plastic has taken off. One of the many partnerships they've nourished is with Adidas – and the relationship goes further than the soft wave-like embroidery on the UltraBOOST sneaker they collaborated on with designer Alexander Taylor for the sports giant. Any company Parley works with has to commit to change. In Adidas's case this means a ten-year promise to reduce, if not eliminate, virgin plastic from their supply chain. And the $200 shoe made from Parley's ocean plastic isn't the only product the upcycled material has gone into. "Adidas didn't put it in just any product – they put it in the best," explains Gutsch. "They even put it in jerseys for Real Madrid and FC Bayern Munich. It shows their confidence in the quality and performance of the material." Other collaborations include G-Star and Pharrell's RAW for the Oceans collection, which saw Pharrell's own Bionic Yarn used to make a denim alternative for the label, with Parley bringing expert advice to the project.

Parley regularly hold talks with a whole host of names from different industries, one being cult pop photographer David LaChapelle. "He's an amazing communicator," says Gutsch. "He's able to speak truth in a way that's provoking but still in an aesthetic form that allows you to take it in." Then there have been the more conceptual relationships, notably with California artist Doug Aitken, who Gutsch calls "a brother I had never met". It was on his way back from a meeting with NASA that Gutsch popped by Aitken's studio. He saw sketches for underwater pavilions the artist was musing over, and Gutsch promises that these multi-angled, mirrored structures are deliciously indescribable unless you go to where they are in LA, put your head under the water to see for yourself. They only work in the depths of the sea and, much like humans, need the ocean in order to survive.

The future looks bright for Parley. They've just started working with the United Nations on a host of sea-saving ideas and projects. Originally the idea of talking to governments "was totally weird", says Gutsch. "Before Parley I'd stayed away from politics and still do." He puts on World Ocean Day with the UN (now upgraded to World Ocean Week), and sets up meetings between heads of state and creatives to continue coming up with solutions to the plastics crisis. If scientists are to be believed, 2048 will be the year of collapse for all commercial fisheries. It doesn't bode well, but Gutsch is still optimistic. "I am proud that Parley will survive me. I see so many people and companies jumping behind the cause. It's so much bigger than one person now."